The Western Washington Quilt Study Group was officially "re-launched" with its first meeting held south of Tacoma on October 20, 2013 at the Business School, Pacific Lutheran University with 20 members present.

It is our goal to share our love and appreciation of our "mother ship" — the American Quilt Study Group (headquartered in Lincoln, Nebraska), along with our love of quilts, quilt history and the history of the cotton textile industry world wide.

AQSG members Joy Neal, Karen Alexander and Susan Underwood are co-leaders of the newly launched group. We began the morning by asking each person to introduce herself and to tell us a little about how she came to be interested in quilt history. After everyone had shared, Karen Alexander presented a brief background about the major quilt history organizations: the American Quilt Study Group; The Alliance for American Quilts and its four major divisions--The Quilt Index, Quilters Save Our Stories, Quilt Treasures, and Boxes Under the Bed; the International Quilt Study Center in Lincoln, Nebraska; and The Quilters Hall of Fame in Marion, Indiana.


Research books and binders, handouts from AQSG and past copies of Uncoverings were made available for viewing, as well as handouts from other organizations mentioned above.

Members present were asked for in-put about what they would like to see future meetings cover. We also discussed the idea of meeting at and working with some of the museums and/or historical societies around the State to help them identify the quilts in their quilt collections. 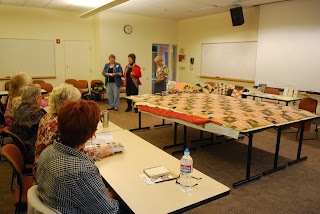 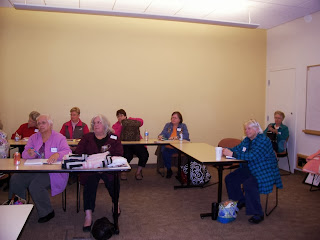 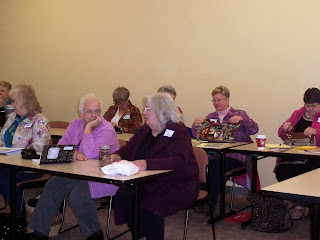 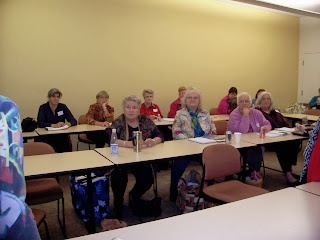 Our first program was a Bed Turning with everyone encouraged to bring one or two quilts. The quilts were then layered from oldest (top) to newest (bottom). Each owner was encouraged to tell us what they knew about the piece and to ask questions of the group.  We then shared our questions, ideas, and opinions about each quilt as it was shown.

Some brief notes on each quilt follow, thanks to Susan Underwood, with photographs thanks to Christine Turner.

Each owner/member is welcome to email Karen Alexander with more details to be added to the blog record. The more we share, the more we learn. (The quilt owner's name is listed first.)

(1) Karen Alexander - The oldest quilt shared — an 1840’s pieced quilt purchased on e-bay.  It was an excellent collection of early 19th century fabrics, including a possible rainbow print.  It was suggested that such a quilt would be a good example for further study of dye and printing techniques. 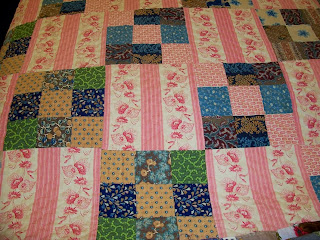 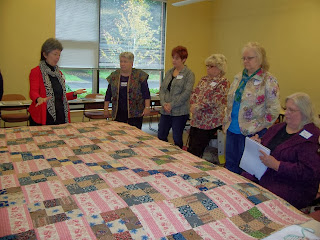 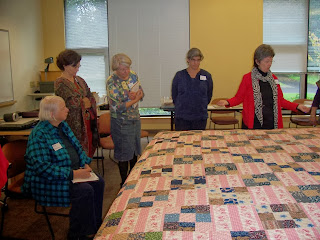 2.  owner??      : summer spread, red and green center floral applique with scalloped edge bound in light (mint?) green.  Presented as a contrast of mid-20th century applique to the 19th century red and green applique that follows.  Scalloped edge, use of sewing machine, color of green fabric, and quality of button-hole applique stitch are all indicators of 20th century origin of this piece. The pattern is very similar to Tea Rose (BB# 18.33) which was a Carlie Sexton pattern. See page 78 in Brackman's Encyclopedia of Applique. 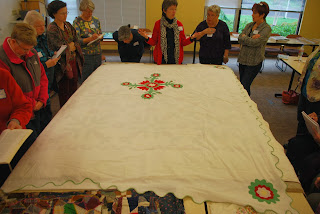 3.  Kathy Anderson:  Red and green floral applique, 1850-1870.  Purchased in Iowa.  Red-print fabric is an example of black and yellow dyes “eating” holes in the red background.  Iron-oxide dyes? Very interesting border for an applique quilt of this period. We could find no specific match in the Brackman applique book for this pattern. 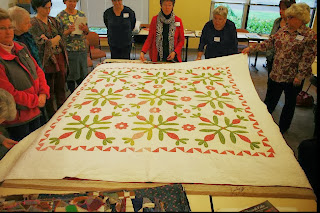 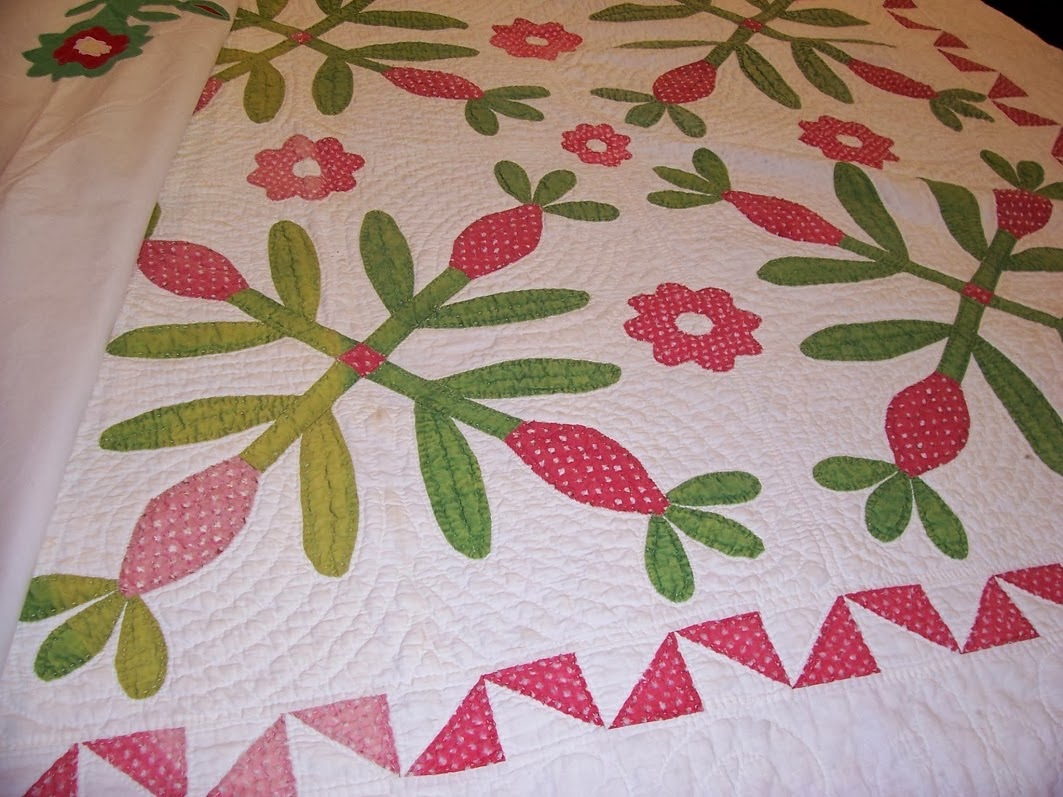 Below we compare and contrast the greens in the two fabrics.

4.  Amelia Beadle:  Pieced quilt, colors typical of “Pennsylvania German” quilts of mid-19th century.  Purchased from man in a van, Paducah.  (Looking at the Brackman book, the closest pattern we found was BB#2060, published in 1931 as “Autumn Leaf”. We don't know the name this quilt-maker may have used for this pattern.)  Amelia dates the quilt to c. 1865, Pennsylvania.  Construction differences among the blocks indicate they might have been made by several people.  Amelia also asked if some of the blocks with darker “double pink” fabric could be from a slightly later date.  Note the print backing—white with multi-color polka dots.  Machine binding is much worn at edges—possibly a replacement binding? 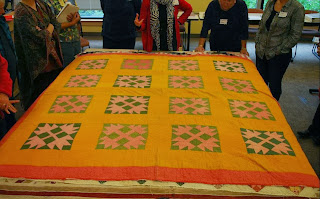 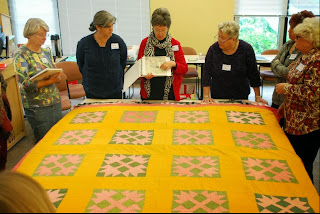 5.  Amelia Beadle:  Pieced “star” blocks alternating with shirting print square blocks, 1860-1880.  Corners cut out for bed post but is not a full-size quilt; possibly for a child’s bed.  Star is composed of a center square with triangles.  (You can see variations of this block on page 267 of Brackman's Encyclopedia of Pieced Patterns; specifically BB#2138 a-d.) Fabric selection dramatically alters appearance of pieced blocks; compare the blocks made with 3 fabrics to the blocks made with 2 fabrics. Brackman gives a different # to each. 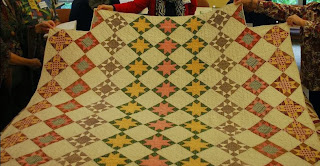 6.  Kathy Anderson:  Indian Puzzle variation. BB# 2050 (Nancy Page)
Red & beige pieced quilt, pattern has a center square surrounded by 90 degree triangles.  Sashing and border triangles appear to be pieced but are cut from striped fabric.  Purchased Portland, Or.  Cut-out bed post corners are distinctive because of curvature added to accommodate post.  Careful use of striped fabric and interesting repairs—see photos.  Striped backing fabric has been carefully mended with remnants of the unfaded original fabric.  One block has shirting print triangles appliqued over the original fabric.  Estimated to be 1850s-1860s era although one blue block may have earlier fabric.


Indoor lighting can be very frustrating. The red in this quilt shows ups as a rusty brown.

7.  Joy Neal:  Top purchased from garage sale in 1990s.  Four-patch blocks alternate with plain blocks, diagonal set.  Small quilted square of same pattern and fabric, perhaps done as a doll quilt.  Quilt maker, in her 90s, was at the garage sale.  She told Joy it was made in the 1890s.  Some 1880’s fabrics are in the pieced blocks.

8.  Amelia Beadle: Blue and white “crazy Ann” block pattern.  “Later the block became confused with the swastika and was no longer made.”  Purchased from a man in a van whom Amelia met in Paducah.  Seller said quilt was from Massachusetts.  Brackman has this pattern as #1130b with 16 names including, swastika, flyfoot, whirligig, and the most interesting “pure symbol of Right Doctrine” (Hall).  That name sounds like a research project.  Crazy Ann was not listed by Brackman, may be a very personal name or a regional name.

9.  Carol Pittmon:  Log cabin, Barn Raising set, pink and brown with white shirting prints.  Blocks appear to have been done by more than one person.  Most are not foundation pieced, but 4 blocks are and some squares show more deliberate cutting of geometric prints than other blocks.  Only a few of the log cabin squares have a red center block; the other centers are light colored prints, many appear to be shirting prints.  Estimate 1890s-1910 based on color. 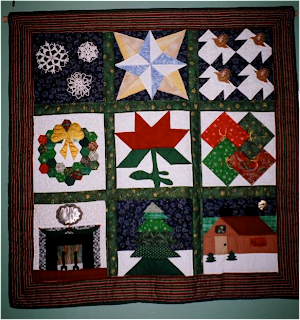 The next meeting of the Washington Quilt Study Group will be in Tacoma on Saturday, January 25, 2014, 10:00 am-2:00 pm.  Delaine Gately will present a program based on her collection of more than 200 quilts.  Delaine collects and lectures on antique quilts and histories of the quilt makers.  Among her many quilt and textile interests, Delaine makes art quilts and clothing.  Her work has been exhibited at the Pacific West Quilt Show and other major shows.   She is a member of the Western Washington Quilt Study Group and the American Quilt Study Group.

Following is preliminary information about some programs we are planning for 2014.  All dates are tentative until we can confirm availability of location and program presenters.  We’ll let you know as soon as dates are confirmed.

March 2014: Meeting in La Conner with a program related to the La Conner Textile Museum collection.

Saturday, May 10:  Presentation of early 1800’s American, English, and French quilts by Mid-West collectors who are traveling to the Northwest at the invitation of Karen Alexander and the Western Washington Quilt Study Group.  On May 10 their program will done at a location south of Seattle.

Weekend of May 16-18: The Lopez Island Quilt Study Retreat Program will include signature quilts, quilt restoration and preservation, and the same Michigan collectors. (These are quilts that have not been seen on the West Coast before.)

The full Retreat program is being developed but it will include a Bed Turning, and Show and Tell, and quilts at the Lopez Island Historical Society.  The historical societies on Orcas and San Juan Islands will also have quilts hanging that weekend.   Full information will be sent to you when the Retreat program is complete.

Topics suggested for programs in late 2014 and beyond include dating quilts from 1900 to 1930, Marie Webster and her quilts, and the impact of technology and the modern quilt movement.  Many who attended the October 20 meeting also expressed an interest in genealogy and researching signature quilts.  Let us know if you are interested in doing a program!

Enjoy the holiday season and we hope to see you in early 2014.
Susan Underwood
Joy Neal
Karen Alexander

Posted by KarenQuilt at 7:17 PM

KarenQuilt
Currently I am actively lecturing about quilt history in Western Washington and occasionally Oregon.